4 Crowdfunding “SCAMpaigns” That Taught Us a Painful Lesson in Marketing 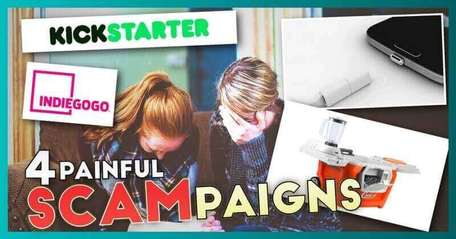 “At the finish line… nearly”

Many crowdfunding projects delay, but 9% of all Kickstarter projects eventually fell through, according to Kickstarter. While it appears these creators most often prey on scientifically illiterate or ill-informed backers, with the smartest marketing strategies, even your smartest friends may have been fallen victims to these s-campaigns.

Top the list is Coolest Cooler, a small machine that instead of cooling drinks, evaporated US$13 millions into thin air in 2014. The project creator promised backers a US$185 cooler that blends smoothies, plays music and charges your phone. Since Coolest Cooler sounded like the all-in-one tool every picnic-lover had been wishing for, it immediately gathered more than 62,000 backers. After a 2-year delay, Coolest tried to squeeze more money out of its backers’ pocket with another “expedited” delivery if they pay US$97 more.

Lesson learnt: Start in a market people are too excited to think about its pitfalls

No one was cautious about the risks when Kickstarter first started out. Back in 2014, Kickstarter was still an expanding platform that excited many: every creator seemed genuine inventor desperate for your help to bring their meaningful project to life. There might be a few delays in certain projects; but successful cases were much more frequently heard.

“Connection is a znaps away!” is what Znaps pitched its 70,122  backers, but the company did quite the opposite. The CA$9 magnetic adaptor that claimed to provide a seamless charging experience is neither delivered nor functional. Two months prior to the promised delivery day, Znaps stopped updating and responding to their customers, until a year later, some customers claimed they had received an email from Znaps about lost orders and discounts for retail sale of Znaps. Recently, the Hong Kong government disqualified the deal from an ICT Award it won in 2o16 for its indefinite delay.

When compared to its dupes on other local sales platforms, Znaps dominated the entire market. Partly because a diverse pool of media from Hong Kong, Japan, Korea, the U. S., Italy and Germany (see below for more) featured Znaps in beats from business, technology to lifestyle. The total clicks of Znaps’ Kickstarter page alone amounted to over 48,496,000. Plus, strong publicity indicates good market response, a consideration the government takes in giving out awards, funds, and exposure to startups and projects.

‍Lesson learnt: (2) Offer a groundbreaking solution people are willing to pay for

No iPhone users would want to scratch their precious gadget, but the product design has made it inherently difficult not to. For just a few dollars, Znaps adaptor conveniently solves the problem that has been bugging every iPhone user for way too long.

The team behind Znaps is not the first time failing a public campaign on Kickstarter, they had launched a coffee machine Arist a year before. Over US$800,000 were raised for this remote coffee brewer smartphones can take control over. Despite being endorsed by the Hong Kong government with an ICT Award in 2015, Arist failed to deliver any product to backers even until today. With their proven record of “crowdfunding success”, the team later started a business (archived) to teach potential creators the know-hows and profit from 30% of the fund raised. Regardless, the founders of Znaps and Arist blatantly denied any scamming accusations.

Similar to Znaps, Arist capitalised on its wide publicity and government’s recognition to up its crowdfunding game. Both Arist and Znaps are solid proof that media coverage keeps good things coming.

Finally, here comes a victory for all honest creators and backers. The campaign was promptly suspended by Kickstarter at the very last minute. With the gimmicky “first-and-one-of-its-kind gourmet-flavoured” jerky made from high-end kobe beef at an unbelievably affordable price, the project collected US$120,309 in just a month. Given the then lift of ban on beef imported from Japan, suspicion over the enormous supply of beef grew and snowballed with the lack of creator’s information. Kickstarter was forced to put a halt on the project once-and-for-all.

‍Lesson learnt: Be genuine with your users, or convince them so

From his or her Japanese upbringing to positive reviews by customers, creator of Kobe Red told backers almost everything (except his or her contact information). In addition to a personal touch, customers’ reviews presented the beef jerky as something that had been through rigorous R&D process. Backers were more likely to be sold and bought the “how-I-love-the-tasty-jerky-from-my-homeland” story.

What we can learn as a Growth Marketer

These projects share one thing in common—an unbeatable marketing game. From launching the product in the right market, to harnessing media exposure, these creators crossed everything off the marketers’ checklist. If they can make millions out of an unfinished idea with some marketing tricks, there is no reason why you can’t on a finished product.